The ever-growing cities like Oslo or Copenhagen embraced water by adapting areas situated by the ports. Drawing inspiration from the Scandinavian concept of the harmonious city growth, and also from the best architectural benchmarks, the DOKI project emerged. 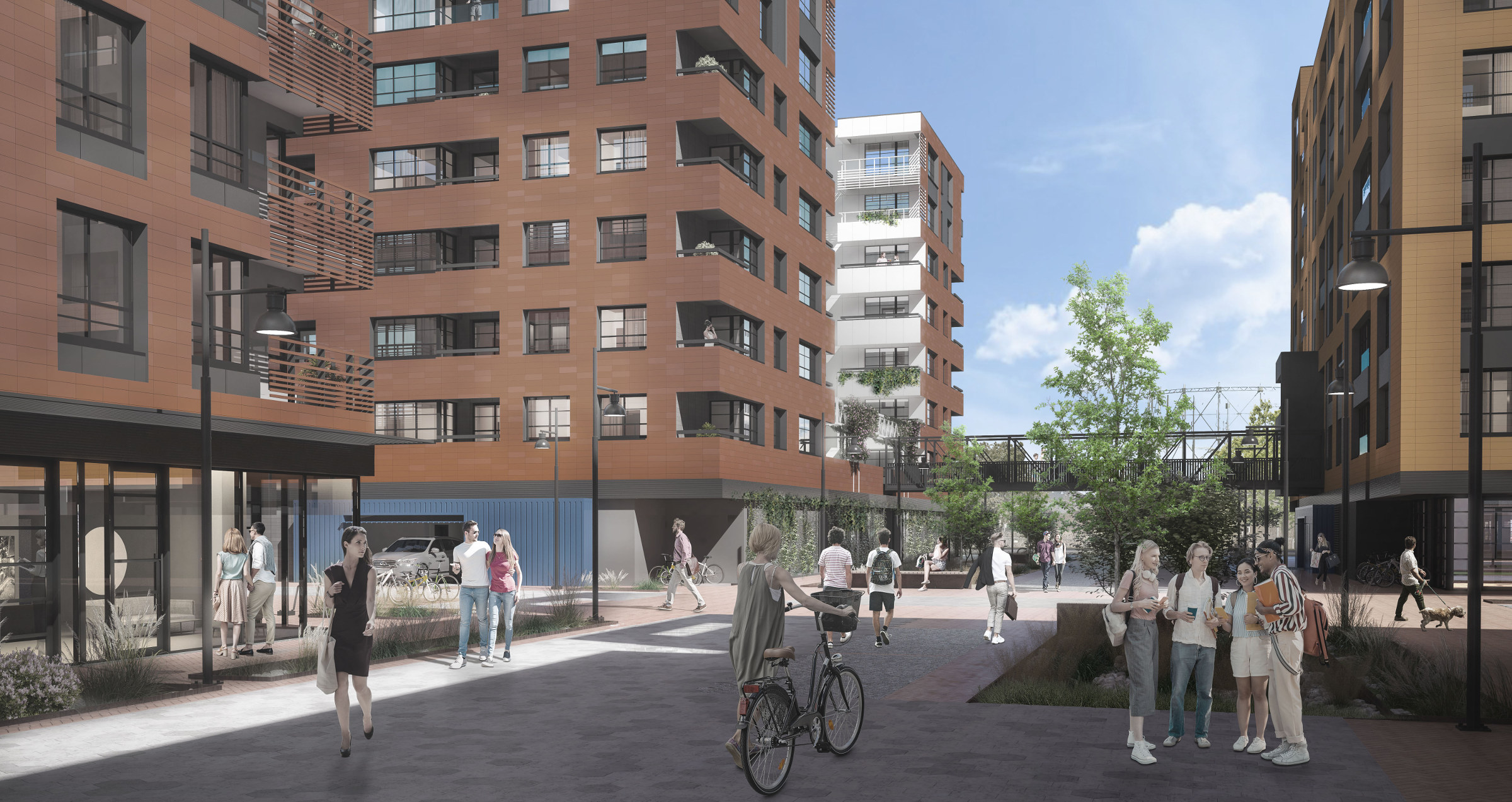 The DOKI living project, master plan for the whole investment, and the preservation book, are all created and designed by PhD, Eng. of Architecture Wojciech Targowski, the design creator of the European Solidarity Centre.

Investment spaces are being sought in city centres. Industry is withdrawing from precious grounds, which further grow in attractiveness when located nearby vast bodies of water. The waterside areas, deserted by ports and shipyards, are becoming the most sought-after residential sites. Bustling docks and wharfs of London, Hamburg, Oslo, Bilbao, and other European and world port cities, are all building contemporary and intriguing identity of towns.

This is what is also happening in Gdańsk, especially across the post-shipyard areas, where the valuable heritage of the historical events scenery is becoming inspiration for the contemporary.

It is not going to be yet another residential district, but an authentic city, with a diverse functional programme, where – alongside apartments – there will be compounds of shops, restaurants, and cafes, complemented with office and commercial job vacancies, enriched by a tempting cultural offer. Such space will entertain all features of an intense city area.

The intention of the project, though, is to maintain balance, to prevent the abundance from turning into a burden. Consequently, the designers came up with a friendly area which encompasses city life, favouring rest and integration, targeting the employees, local residents, and tourists as well. The elevated green court yards will house recreational sites dedicated only for the residents. They will make it possible to combine upsides to the city features – vicinity of services and attractions, and will cater to the need of quiet privacy.

In APA Wojciechowski we have designed for Torus two office-commercial buildings, located in a prominently exposed site – in direct vicinity of the Occupational Safety and Health Hall (Sala BHP) and the European Solidarity Centre, close to Droga do Wolności street, and the Solidarity Square housing the monument of fallen shipyard workers (Pomnik Poległych Stoczniowców). In such a location designing decisions must be made with particular carefulness.
The area urban planning is determined by the local spatial plan, relatively flexible in principle, though, based on the historic nature, the area is also covered by preservation protection.

One of the preservation guidelines was to apply gradation, i.e. staging the height of the building structure. From the side of Sala BHP and Droga do Wolności the building height structure should be lower, so as not to overwhelm the historically-important facilities. The more westward you go, the higher the buildings one can erect.
Thus, the buildings we have designed will constitute the background architecture – they will create a secondary ground for the important facilities linked to the history of Gdańsk.
While studying adequate proportions and directions of the compound development, we were aided by two urban networks that come together on this area: the former is the direction of Sala BHP and the erstwhile management building, the latter being a sizeable U-Boat construction hall, and the then tin plate house. It defined, to a certain extent, the form dynamics, view openings, and the set-up of squares.

Obviously, the functionality of the facilities remains key. As the buildings are to serve as office facilities, we were looking for the form proper for this very function, which will provide the suitable light supply to the working area, at the highest standard possible. On the top storeys that side with Droga do Wolności we have envisaged the realization of terraces, which will offer breath-taking views, and will draw people to arrange informal meet-ups in the open air.

While devising storey divisions, we took inspiration both from historical photos, and the existing post-shipyard buildings as well. We were trying to strike a dialogue between the old and the new, bearing in mind our intention to create a peaceful, toned-down background architecture. The building facades come with a high dose of replicability and modular nature, and the window splits go in harmony with the glazing of the old shipyard buildings.
We were striving to maintain the continuity of the facade on the ground floor, which resembles the construction of the former plate house. In a symbolic manner, we have restored characteristic elements of the gratings, which were used to transport tin sheets. Around two solid figures of the buildings we have designed finish casings, which completed the area from the viewer’s standpoint, providing a certain continuation, and defining internal courtyards. The technical fixtures on the roofs will be covered with openwork grated constructions, which also results from the inspirations derived and based on historic buildings (their roofs).
Searching for construction materials our objective was to maintain a crude character, close to the shipyard building in its colouring and texture – brick-like red, earth shades, greyness of concrete, combined with steel elements in granite hues. Our goal was not to create a pastiche, copying the forms of historical artefacts. We were on the lookout for the symbolic references and dialogue through a well-developed detail noticeable for the expert eye.
Throughout the entire design process, a major role is played by the sustainable approach to construction. Solutions such as green roofs, water usage efficiency, or biking infrastructure, have become a non-negotiable standard. Nonetheless, the office buildings will offer much more of interesting and innovative solutions, acknowledged by ecological certificates. The erection of the buildings in such an important place comes with immense responsibility. We wanted our office buildings to create a friendly atmosphere for work, but at the same time, we wanted them not to distract anybody’s attention from the iconic nearby buildings.
The already-designed office development structure will soon become an integral part of the multi-functional city habitat of the Młode Miasto, pulsating with life all around the clock.

This website uses cookies to improve your experience while you navigate through the website. Out of these cookies, the cookies that are categorized as necessary are stored on your browser as they are essential for the working of basic functionalities of the website. We also use third-party cookies that help us analyze and understand how you use this website. These cookies will be stored in your browser only with your consent. You also have the option to opt-out of these cookies. But opting out of some of these cookies may have an effect on your browsing experience.
Necessary Always Enabled
Necessary cookies are absolutely essential for the website to function properly. This category only includes cookies that ensures basic functionalities and security features of the website. These cookies do not store any personal information.
Non-necessary
Any cookies that may not be particularly necessary for the website to function and is used specifically to collect user personal data via analytics, ads, other embedded contents are termed as non-necessary cookies. It is mandatory to procure user consent prior to running these cookies on your website.
SAVE & ACCEPT